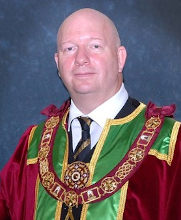 I extend a most sincere welcome to all our Guests many of whom have travelled from afar. Their commitments are considerable, yet they have found the time to be with us here today in Leicester.

I would ask that you save your welcome until after I have introduced them all to you.

Brethren I am pleased to welcome in alphabetical order:-

We were also to receive W. Bro. Paul Newhall who is the Sovereign Grand Master of the Allied Masonic Degrees for USA. Sadly, Paul has taken ill during his visit to England and he and his wife Georgia have flown back to America. We wish him a full and speedy recovery.

I also thank all those Provincial and District heads of the myriad of Masonic Degrees for their attendance today.

Also, many congratulations to those who have received Grand honours today, this is a special day for you, and I hope it lives long in your memories.

The 2018 meeting of Grand Court was a busy affair to say the least with a record attendance due in part to the unique event of the Constitution of the Grand Court of the Masonic Order of Athelstan in India - our first daughter Grand Court. I am pleased to report that both the Deputy Grand Master and I attended the Inaugural meeting of their Grand Court in December 2018. I will return this December to support M W Bro. Bharat as both our Grand Courts continue to work together in mutual harmony.

The Grand Court of the Masonic Order of Athelstan in Australia was constituted on 6 April 2019 with RW Bro. Richard Elkington becoming their Primus Grand Master.  I extend my gratitude to RW Bro. Arthur Macken for officiating on my behalf and I wish our second daughter a very successful future.

Last year in my address, I referred to the completion of the realignment of our domestic Provincial boundaries at the end of 2017.

Brethren, this has been a huge success with 6 new Courts Consecrated that would just not have been possible prior; thus, bringing Athelstan masonry to those who may not have previously had the opportunity in their locality.

My words from last year are worth repeating;

This also serves to remind us of the importance of securing and maintaining our relationship with the Craft and Holy Royal Arch more generally, as well as the wider Masonic world.

January will see me lead a delegation to Rio de Janeiro to Consecrate what will be the first Court toward an Overseas Province in Brazil.

My gratitude is directed to RW Bro. Jose Mendoza and the brethren of Bolivia and to our Grand Registrar RW Bro Stephen Priestley for their diligent work.

Last night The Ancient Masonic Order of Alfred the Great enjoyed a very successful meeting and I congratulate all those new Knights of the Order; many of whom you saw in procession today. The transition from Scarlet Mantle to Alfred the Great was finally completed yesterday.

As promised, the reformatted Appendant Order now has a clear focus on rewarding those deserving members of Athelstan with a fair qualification procedure. You will learn more about this soon via your Provincial Grand Masters and I once again thank RW Bro. Chris Ansell and his team for their incredible efforts.

I am now going to use a word which strikes fear and confusion into most of us Freemasons; this word is of course change!

As part of a 5-year Ritual improvement programme the Grand Marshal has put forward amendments to our Ritual which have been approved by the Grand Witan as just that; the improvement of the Candidate’s entry into the Order. Brethren, most of these amendments being simply clearer and constructive rubric to assist Courts.

Our ritual is living and therefore should evolve, and 5 years of use has demonstrated that some tidying up was indeed necessary. The changes that you will see are common sense based and do not require the relearning of huge amounts of new ritual.

On 29th October and courtesy of the Province of Northumbria I will be taking the Chair at the first working Court meeting of Yodene Sud Court No. 144 and will deliver the revised ritual. Thus keeping up my personal record of delivering from the Chair every version of our Ritual since time began!

The Grand Marshal will be issuing these amendments for use as of 1st January 2020.

We have just enjoyed the 2019 Chevalier Ramsay Lecture delivered in great style by Brother Martin Beard. It has been a concern to me for some time that whilst we enjoy the lecture at Grand Court none of our Brethren ever get to hear it delivered following that.

Change is needed to enhance this wonderful and unique aspect of our Order and a reformatted procedure will commence with the award of the 2020 lecture.

Each domestic Province will be required to invite the Chevalier Ramsay Lecturer to deliver his winning lecture at a Court meeting within each Province during his year. The acoustics within this wonderful Temple have proved difficult for delivery of the lecture and as such we will continue to award the Chevalier Ramsay Lecturer at the Annual Assembly, however, we will remove the delivery of the lecture as of next year. A modest expense will also be awarded to the Lecturer to assist with this requirement and full details will be distributed by the Grand Lecturer in due course.

At Grand Witan this morning some tweaks and tidying up of our Statutes were approved for your kind ratification today. The majority again being the correction of erroneous or repetitive entries. However, as with our Ritual, the Statutes are constantly evolving, and we must continually review these to reflect the changes in our Order as it grows.

A good example being that of the transition from Scarlet Mantle to Alfred the Great and another being the procedural changes regarding the duties of Grand Secretary, Treasurer and Registrar.

We have introduced the rank of Grand Historian for obvious reasons and we have also defined the number of Deputy Grand Secretary’s permitted.

Listening to our Provincial Grand Masters; we have added that a Provincial Sword may now be dedicated as well as Provincial Banners.

Statute 66 was an original well-meant tenet stating that our charitable giving should be directed towards our Craft Lodges and Chapters. Whilst this is still the case this Statute has become somewhat of an issue, so it has been reworded and restructured to make sense to everyone.

It now gives me great pleasure to say thank you to the individual Brethren, Courts and Provinces that have supported my personal charitable cause during this year for the Masonic Charitable Foundation via my Craft Provincial Festival. Brethren I survived over 80 miles of the 3 toughest endurance runs imaginable. 2 weeks ago, I finished my 2019 running season with the Kielder trail marathon, just for fun!

Last year we heard a splendid and inspirational address from Barbara Pollard as to the efforts that her community in Malmesbury are making to set up a fitting memorial to King Athelstan, our Glorious founder. Indeed, we made a very generous financial contribution.

That is, the whole community except for the ecclesiastical authorities at Malmesbury Abbey. Their prejudice towards Freemasonry was unacceptable and resulted in us pulling our support from this worthy project.

All is not lost; I am pleased to report that the Athelstan Museum at Malmesbury as part of their relocation and modernisation during 2020 has offered us a rather interesting prospect. Believe it or not this museum has no artefact or major standalone display regarding our dear King.

I mentioned earlier about Provincial Swords and you will agree that Masonry is familiar with their ceremonial usage. Through the kind assistance of Barbara, we have established a connection with the renowned swordsmith Hector Cole. MBE.

It is our intention to commission him to forge a sword using Anglo-Saxon techniques and to be made as historically close as possible to a sword that would have been familiar to Athelstan.

Once completed this sword will take pride of place as the centrepiece of the Athelstan Museum. Brethren the display of this sword will be fully designed and credited to our Order.
There is a plan for a video of the forging of the sword that will include interviews with members of the Order.

I have charged Malmesbury Court No. 100 via their new Provincial Grand Master to oversee this exciting project. Best of all the funds already donated will be reassigned to this project.

We have had a busy year and 2020 will be more of the same as our Order continues to develop and grow. I feel that Athelstan Freemasonry offers a refreshing and exciting path to all its many members.

I have accepted an invitation from Leicester’s Hindu community to join in this year’s Diwali celebrations and thank W. Bro. Ramesh Khetani for organising this.

I wish you all a very Happy, Healthy, Prosperous and Peaceful New Year which commences on Monday 28th October.

As a matter of interest, tomorrow is the 1080th anniversary of the death of King Athelstan at Gloucester.

I wonder what he would have made of all this!

I must content myself with thanking you, once again, for what you have done last year, and for what you will do in years to come.

Brethren, thank you for your kind attention.