Instituted from the very formation of the Order and first awarded in 2006 at the primus Annual Assembly of Grand Court; the Chevalier Ramsay Lecture has over the years become somewhat of a ‘slot-in’ to Grand Court.

This coupled with the poor acoustics at our traditional home has resulted in the Chevalier Ramsay Lecture losing some of its lustre and standing in Freemasonry.

During my address at the Annual Assembly of Grand Court in 2019, I stated that change was needed to enhance this wonderful and unique aspect of our Order and a reformatted procedure was to commence with the award of the 2020 lecture. 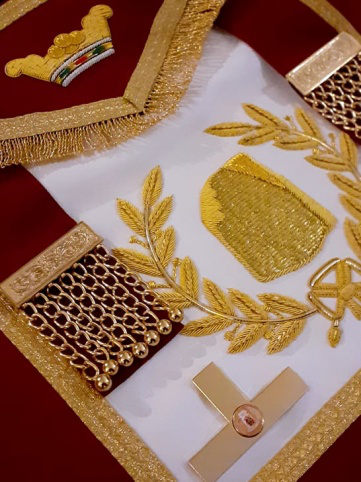 The Grand Lecturer on his appointment to that active Grand Office will be awarded the Chevalier Ramsay Lecture for the year of his appointment. If he is re-appointed or already holds that a previous award, he cannot be re-awarded.

The Lecturer is appointed for 1 year running from the date of his award.

The Grand Lecturer will recommend to the Grand Master a winning lecture after consultation with a small Committee composed of the Eminent Grand Prior and Grand Secretary.

The recommended award shall be notified by the Grand Lecturer no later than 31st July of each year.

A database and shortlist of all lecturers submitted will be kept and administered by the Grand Lecturer, assisted by an appointed Deputy Grand Secretary.

The Chevalier Ramsay Lecturer of the year will be announced at Grand Court and the Lecturer will be invested with the collar and jewel after the Grand Rank awards.

Along with the special collar and jewel, each successful Lecturer will receive an award of £350 to assist his expenses.

Each Province should be encouraged to submit to the Grand Lecturer a suitable lecture annually and by 30th June.

Each domestic Province will be required to invite the Lecturer to deliver his winning lecture at a Court meeting within each Province during his year via the Grand Lecturer. This they must submit in writing to the Grand Secretary, by 1st November, nominating a Court a meeting date.

If the winning Lecturer is from an Overseas Province, then he may choose to deliver his lecture via secure electronic means such as Zoom, Teams or Skype to the Court. He may also select to nominate a previous Lecturer to deliver by proxy on his behalf or any suitably qualified brother of the Order.

The appointed Deputy Grand Secretary will coordinate with the Lecturer and each successful Province.

The subject matter must be of a Masonic nature or that connected to Anglo-Saxon history. It can be wide ranging and must refrain from the usual taboos within Freemasonry.

It should be between 35-45 minutes (or 3600-5400 words) in length and may include pictorial content etc. and the use of electronic presentation equipment is permitted.

All sources must be referenced, and any copyrighted materials must have permission to be used.